Here’s a trailer for one of my new videos.

I cannot play this ringtone, it is scratched. 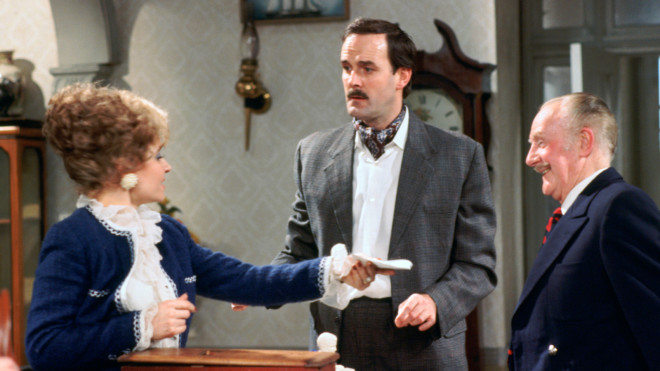 There is a yet another re-run of Fawlty Towers showing in the UK soon on UKTV and the Guardian newspaper have published a short clip of the latest “about” programme which is to accompany it, which you may be interested in watching. Or not.

A starring role for Camilla the chicken in this short epic.

The chickens Camilla and Rocky, came to visit this morning…

Here’s the page with the Telegraph’s wrong picture credit.

Today I started work on, and indeed completed, my very latest movie.

I’m delighted that the script came in at a mere 85 characters – a triumph for brevity.

I’m now finishing the sequel, “A World of Cheese” which will be released online very soon. It’s quite a bit longer.

Jimmy was a charming host and I loved doing the show.

Thank you for all the well-wishers who recently expressed concern about my black eye. It was of course merely make up applied for last Wednesday’s Prince Charles bash, which by now you’ve possibly seen on the TV – not that that obviously theatrical device stopped some poor confused journalist from assuming I had been in a real fight and attempting to trade some snaps for good old British pounds. I expect the fact that sterling is about to be worth about as much as Iceland is focusing journalistic minds upon cash, as well it might, for how else will they afford their new quills, ink made from the blood of the poor, and the odd pint of whiskey?

The other matter of some concern to kind people has been the fate of our cottage, around which I recently showed this rather nice Frog from Seesmic, and I’m glad to say that so far (fingers crossed) we’ve escaped being fried to a cinder by the awful rampaging fires.

You can follow the great and very difficult work of the local fire brigade here.

We love gadgets in this house, and so whilst we’re preparing the next two episodes of Headcast for release this side of Christmas, along with some other festive goodies, we’re making our websites iPhone gorgeous.

This is a combined feed including this blog, Twitter, and the free podcast.

Longer version of the US Election interview