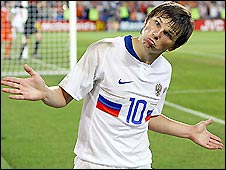 I am fascinated by the way nobody assumed the Russian football team were going very far in the Euro 2008 competition, until their spectacular annihilation a couple of days ago of the rather good Dutch side.

It made me consider two things:

Firstly, that the media pundits, so-called experts who sit around filling in the TV pauses with strategic analyses illustrated by endless slow-motion, graphically-adorned replays, all immediately said, once Russian supremacy was an established fact, how very good the entire Russian team was with their star player Andrei Arshavin in place. It seemed as if the Russian football team had moved miraculously, along with the entire Russian nation, from being ex-communist, broke no-hopers, to resurgent, gas-and-oil producing, cash-rich global contenders.

Secondly, that the bookmakers knew exactly what they were doing encouraging us all to bet on Holland, by shortening the odds and making them favourites, just before they played the disastrous match that sent them home.

I wonder how many of the bookmakers were Russian…

This entry was posted in football, Russia, television. Bookmark the permalink.

4 Responses to The Russians